Even though it isn’t common practice these days, you may have come across a situation where a store employee cuts up a declined credit card. But why do cashiers cut credit cards? What purpose does it serve, and why is it so rare nowadays?

Why Do Cashiers Cut Credit Cards?

In the 70s and 80s, when credit cards were new, banks rewarded stores for cutting up declined cards to counteract fraud cases, which mostly came from lost/stolen cards. Cutting up a card would ensure it wouldn’t be used again. But with the rise of electronic transactions, it has become outdated.

So, if cutting up a credit card was a preventative method to ensure that fraudulent transitions don’t occur on a credit card, why was this the best method to use at the time, and why is it no longer an effective measure to prevent fraud? Let’s look into the details…

When credit card transactions were still a very new practice – the so-called Wild West – card issuers such as Visa, Mastercard, and American Express were confronted with their first cases of credit card fraud.

So, any person who left their card behind at a restaurant could easily become a victim of credit card fraud. If the card was in your possession, you could rack up thousands of dollars of purchases, and the only way for the bank to know who made the purchase would be by authorizing the transaction through the credit card number.

At the time, banks would send out a book filled with all of the known credit cards that were reported stolen. And, if a customer presented the store with a card matching a number in the bank’s regularly updated list of stolen cards, the store could confiscate the card and return it to the bank for a $50-$100 reward.

However, there were also cases of fraudsters stealing the cards back. So cashiers would cut up the card so it couldn’t be used again. As long as it was identifiable by its number, it would be accepted by the bank. It didn’t need to be functional.

Bear in mind that this was when digital transactions didn’t exist. There was no Internet, no security chips in your credit card, and the practice of credit card itself was still in its rudimentary phases. But as technology improved, so did the security protocols.

Chances are you may be wondering why cashiers cut credit cards because you’ve seen it in a movie or something like that. But, for the most part, security practices have long since evolved past cutting up credit cards.

With the invention of the Internet and the migration to digital transaction processing, a bank could  authorize each transaction quickly and at a low price  which removed “floor limits.” And they were also able to cancel credit cards remotely, meaning that cutting them up became redundant.

But as banks upgraded their technology, fraudsters followed suit and found various ways to exploit the security systems.

When banks started to use magnetic strips on credit cards to conduct digital transactions, criminals learned how to use them to “clone” cards, meaning they didn’t even need to have the actual credit card to make unauthorized transactions and go on big shopping sprees.

Over the years, banks have developed more security mechanisms, such as microchips, to restrict cloning.

But the sad reality is that, as anyone that has experienced identity theft will tell you, the security threats are everywhere, and no system is impenetrable once it’s been implemented at scale and hackers learn bout its vulnerabilities.

But, as far as the practice of cutting credit cards goes, there is no point these days because you can easily copy the card, and if a transaction can’t be approved through the credit card terminal, the store won’t accept it as a payment method.

What To Do If Your Credit Card Has Been Declined?

So, even if a cashier won’t cut up your card nowadays, you can still find yourself in a situation where your credit card has been declined, and you can’t complete your purchase.

In the event of a declined transaction, the credit card will not be usable, and there are three things that you can do to rectify the situation.

Firstly, review your card information. If you’re making an online purchase, you may simply have entered the wrong card number – it’s an easy mistake to make. You should also check your credit card’s expiration date to ensure that it hasn’t expired.

Secondly, you can get hold of customer service. If you’re looking for a diagnosis and a solution for the problem, customer service will be able to help you identify the issue and provide you with the advice you need.

The final step is to work with your bank to resolve the issue. There are a few reasons why your card may have been declined, including a suspected case of fraud, spending beyond your credit limit, outstanding payments on your account, or because your account has been closed.

You should work with the bank to resolve the issue. Unfortunately, it may take some time, and you may not be able to complete your shopping today, but that’s the price you have to pay for security.

After your card was declined at the store, you may feel quite embarrassed. So how do you stop yourself from going through that experience again? There are a few ways to ensure that your transactions aren’t declined in the future.

Start by setting card limit notifications. So, sign up through your bank or on your online banking platform for notifications that will tell you when you’ve reached your card limit so that you don’t use it by mistake when there are no funds.

Secondly, you should have a backup payment method, such as keeping some extra cash on hand or another card if a transaction is declined. You could therefore complete your purchase and deal with the card issue later when the timing is more convenient.

Thirdly, make sure that you keep up to date with your payments. Set up an automatic debit order that deducts money from your current account every month to settle outstanding credit card payments. This way, you’ll never fall behind, and the bank won’t suspend your services.

Finally, if you’re traveling outside the country, make sure to let the bank know so that they don’t pick up transactions in a foreign country as suspicious activity.

So, if you’re worried about the cashier cutting up your credit card, you can rest assured that this is no longer standard practice for merchants because banking has evolved since the early days of credit cards when cutting up a card was a way to prevent fraud.

These days, a transaction will be immediately declined in the event of suspicious card activity, insufficient funds, outstanding payments, or exceeding credit limits. However, only potential fraud will lead the bank to cancel your credit card.

In this case, you will be issued a new card. For any other problem,  once the issue is resolved, you can resume regular spending with the same card.

James Smith is a financial expert and the founder of Occupy Cooperative. James has eight years of experience in the financial industry and has spent the last four years in numerous consultation roles while managing his own business. James Smith is committed to sharing his knowledge of personal finances with a broad audience and helping people achieve life-changing financial freedom. 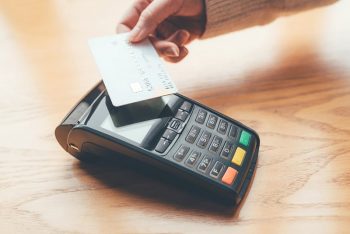